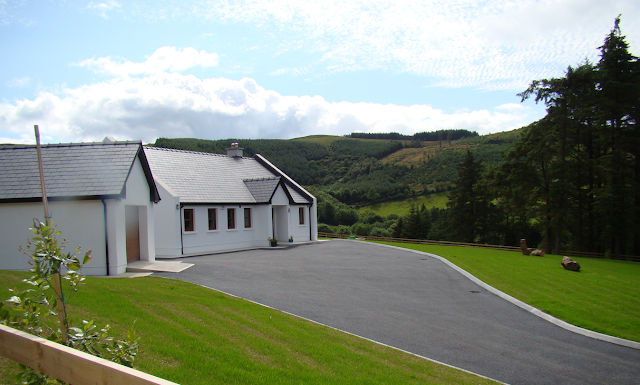 Silver Spruce Lodge is a 4**** Fáilte Ireland approved newly constructed modern holiday home nestled in the picturesque rural area of Silvermines -10 minutes from Nenagh. It is a luxury home away from home.

Posted by Maurice Gleeson at 15:41 No comments:

Silvermines and the surrounding area was home to generations of Gleesons and is one of many hidden gems in rural Ireland. It has a wealth of virtually unexplored scenery and historical sites, even though it lies just a few kilometres from Nenagh (Aonach Urmhumhan), close to the main artery from Dublin to Limerick and the south. The area also has a choice of walking routes, from Glown right across to Templederry and beyond, all chaperoned by the majestic Keeper Hill.

The parish of Silvermines covers a wide area with two churches and three graveyards. Our Lady of Lourdes Church in the village of Silvermines was newly opened in 1961 and Our Lady of the Wayside Church in Ballinaclough was built in 1830 and renovated in 1985. These were the sites for the baptisms and marriages of many a Gleeson over the course of the last 200 years.

There is a long history of mining in the Silvermines area incorporating mine sites at Shallee, Magcobar, Mogul of Ireland lead and zinc mines, and old workings in Silvermines village. Records show that many Gleesons from the area were employed there. Plans were recently announced for a major investment in a Hydro Electric Power Station at the disused Magcobar site.

Silvermines Historical Society was established on a January night in 2012 with some 30 people turning up for that first meeting. Today over seventy SHS members represent an interested and active group who keep in mind their mission statement which is 'to collect and record local history and folklore which would otherwise be lost'. A lot of these marvellous collections have already been published in the local history journal Mining the Past which has been produced every year since 2012. The first issue of the journal can be purchased from the Society's website as an easy-to-download pdf document (10 euro) and includes an account of the Gleesons of Kilmore by local genealogist Nora O'Meara. You'll find 2013, 2014 & 2015/16 copies of the SHS journal for sale in local bookshops or by emailing the society directly at:
silvermineshistoricalsociety@gmail.com

More recordings and collections are in the archives for future use including a valuable photographic collection, gleaned in the locality in 2014. This project is ongoing and the SHS acknowledges the generosity and goodwill of the community in contributing to its success. A mobile scanner is used which means a photo donor need not part with their precious photos.

Walks, talks and outings, too numerous to mention have been undertaken. The  Mining Heritage Walk in the early days of 2015 was a great success attracting 100 people. More walks and talks are planned for 2016 so keep an eye on the SHS website for further details in due course.

The SHS website and Facebook page have been instrumental in connecting the Irish diaspora back to find their ancestors in the locality. Silvermines is a welcoming place for all visitors to the region and will most especially welcome all the visiting Gleesons in August of this year for the Gleeson Clan Gathering 2016.

Posted by Maurice Gleeson at 14:28 No comments: 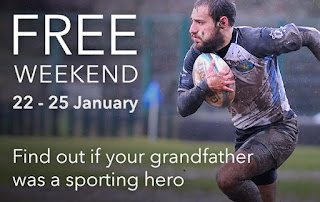 This is great news for everyone, particularly those researching their Irish ancestors as FindMyPast has a great collection of Irish records, many of which are not available from other pay-per-view sites (see below for a complete listing of Irish records held at FindMyPast).

Additional records of Irish interest include the following:

So be sure visit FindMyPast this weekend and mine their database for your ancestors, Irish or otherwise! It's free to set up an account if you don't have one already.

A big thank you goes out to Claire Santry who has written a blog post about it on her IrishGenealogyNews website. Incidentally, Claire's blog is a great resource for all the latest news in Irish Genealogy and is one of the Top 100 Most Popular Genealogy websites. In addition, her free Irish Genealogy Toolkit is invaluable for beginners and experts alike. It is written in a clear easy-to-follow style with excellent links to practically every Irish genealogy resource you might ever want to consult. Thank you Claire!

To access the records you'll need to be registered and signed in, so if you don't already have an account, you can set that up before the free weekend starts (it doesn't cost anything and you don't have to provide any financial details).

Existing 'local' subscribers ie those with an active Ireland, UK, USA/Canada or Australia/NZ subscription will find they have access to the entire world collection over the weekend.

Those researchers with an existing World subscription will find their sub extended by three days at no extra charge.

Choose the most appropriate 'territory' for your research, and enjoy the weekend!

Here is a complete alphabetical listing of the Irish Family History Records at FindMyPast.
Just click on any of the links to be taken directly to that record collection.

Posted by Maurice Gleeson at 11:17 No comments: